Let's see... I've lost track but I think I'm on day 22 for the 29 faces challenge still one day behind...sorry the photo is again bad, just not enough light this early.... it's just a 3 minute scribble with a red ball point.... 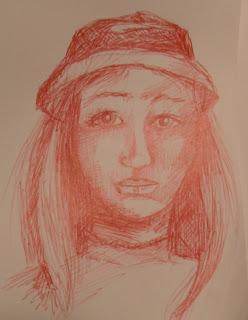 This is Shawnee in red... She's a park ranger at a small state park in NY called Stonybrook. She's totally the outdoor nature lover type but if you're playing trivia she's the one you want to pick first for your team as well. She happens to be in love with a man named Frank from pennsylvania, but they only get to see each other weekends due to the distance. He is currently searching for a job closer to NY. Right now he's doing freelance tree cutting and landscaping. They met at an Uncle Kracker concert. 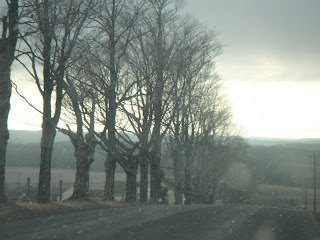 Plus I wanted to share a magical moment this week for Share the Joy, the photo doesn't do the moment justice... It was one of those little moments that just happen and don't really mean anything and not a lot really happens but somehow they're memorable and stay with you for years. I think this was one of those little moments. I was on my way to work and the light was just right, early morning sun through the clouds, with a patch of blue sky ahead, the birch trees looked so white and special, The Band Perry's song, 'walk me down the middle' was playing and I drove into a tiny little snow storm! The kind with big softly falling flakes! And 2 seconds later I drove right out of it, it was maybe 30 yards long, I'm not good with distance but I could look in my rear view mirror and still see it falling just in that one spot, like there was a giant hollywood snow making machine above the clouds churning out big soft snow for a movie set.

Then I drove into another one that lasted just about as long, three more tiny little storms on and off as I went down the road. I was still smiling and replaying that same song in the CD player when the sun went behind clouds, the birches started looking muddy, the snow turned to rain and I ran over an already dead bunny. Yuk! It still didn't take away that magical feeling though and I was still smiling when I got to work!

Posted by Fallingladies at 4:45 AM