Here's my part of the neverending story taking place at Amy's... go here to read the first parts or even join in and sign up to be part of this story...
http://butterscape.blogspot.com/p/onceuponatime.html

Our heroine and her trusty Pegasus flew over the dark ocean under the full moon, so glad to be together again and out of that cavern. 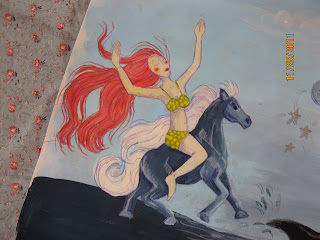 "GO home?", she questioned, "NO way, I want to see the world, the ocean, the sky, the stars!" and off they flew, low enough to feel the spray from the whales blowholes. The beautiful red haired lady blew a kiss to the closest whale as he slapped his tail down on the water and sent a whole wave up towards Pegasus. The whales moved off in their pod, little calves swimming along next to their mothers. 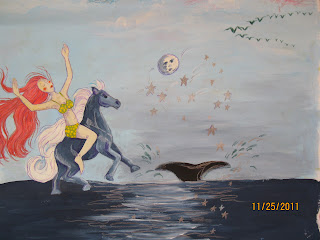 Out red haired lady flew up and up and up with Pegasus, his mane whipping in the wind. They flew along with a gaggle of geese, flying in their tight V going south for the winter. 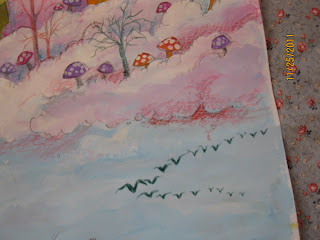 The noise from all their honking was way too loud in Peg's ears so up higher they flew. Climbing higher and getting warmer as day dawned bright, clear and blue. They spotted a world in front of them on a pink cloud. Each cloud ahead of them seemed to hold a whole town of little houses, but they headed to the closest one and landed softly. 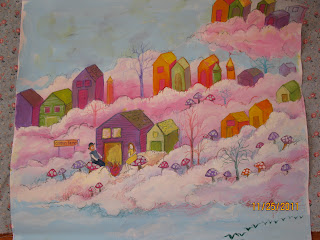 It smelled of cotton candy and reminded our lovely lady of small town carnivals she'd been to as a child. They strolled down the lane of pink and blue and peach houses with giant mushrooms in the yards, when they reached the end of Cotton Lane they stopped before a house with a couple out front. They were sitting on their mushrooms and roasting marshmallows over a bonfire. They introduced themselves as Mr. And Mrs. Panda and Poppy Goldwater. They were just back from a trip across their cloud world and kept their guests entertained all morning with stories of their travels. They'd brought back baklava and origami paper cranes and souvenir spoons and shirts with big paintings of crabs on them as that was the style on the cloud number 9.  Peg and the red haired lady told their stories as well and the four of them became the best of friends within hours. 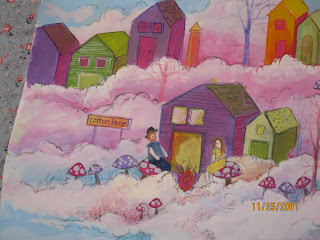 They needed a nap and were invited inside where everything was cuter than even outside. It all looked edible like a gingerbread house and they both slept better than either had in weeks. They felt so safe and protected, with out a worry at all in this cloud world. When they woke the Goldwaters invited them to stay awhile as they hadn't had guests in years. Peg was inclined to stay anyway. .. but when the Goldwaters said they felt strongly that if the pair were to leave soon they'd run into serious danger, they were both convinced to stay a bit. Panda had a touch of the vision and said he saw danger, sea turtles, mermaids and cups of sweet tea in their near future, and he advised they avoid all of the above. "Have another marshmallow", he said and Peg and the red haired day gladly complied.

They laughed and settled in for a long visit, totally unaware at all that the very near future would be amazingly close to the vision of Panda Goldwater. And yet, our red haired lady couldn't shake an unsettled feeling... 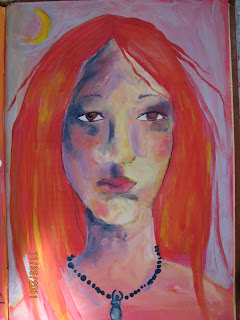 Posted by Fallingladies at 8:50 AM