I found Danny Gregory's blog recently, (just click on it to go there) I'm sure most of you know him but I hadn't, I'm pretty out of the loop on current artists but I love his sketches and this week have been watching all his videos.... he's very inspiring!

As you can tell if you been by my blog much I keep going from one type of art to another  and his thoughts just made sense to me...to put whatever you feel like sketching in your book, making the mundane and ordinary, larger! So I realized I can do it all, I don't have to decide on one type and I can still put it all in my sketchbook with my notes, lists and such and just let it be a record of my days. Simple thought but it just struck me as a wonderful plan! like a totally radical idea or something...  I had been thinking I'd have to quit the challenges as it gets overwhelming , so that I could concentrate on whatever art I decided on as I have so many plans in my head for projects. But I put a few challenges this week in my tiny sketchbook...
I need a bigger sketchbook! 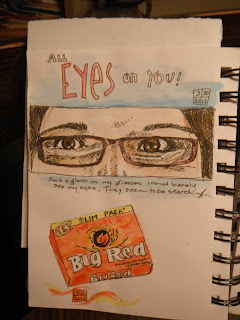 \
I'm linking to Butterfly effect as their theme is eyes... I always draw mine as nooone else wants to pose for me. Eyes are a big deal to me as my son never used to make eye contact and now can sit and stare into my eyes, sometimes I realize he is staring at his own reflection in my glasses but it's still eye contact....
I did get this monkey from a photo on the internet and his eyes were what made me want to sketch him. I really didn't feel like sketching a monkey but that was the lesson in Carla Sonheim's book and you were to grab 4 different preselected drawing pens  before you even had a photo to draw of a monkey, and I was actually surprised how it turned out.  His eyes were green so I was glad I had 2 green pens but I actually like the orange and purple in the sketch even though he was brown in the photo... 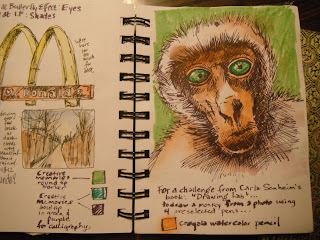 Not sure if Cameron has her lesson posted yet but I will link there when she does, you should go see hers as she's following the book religiously! 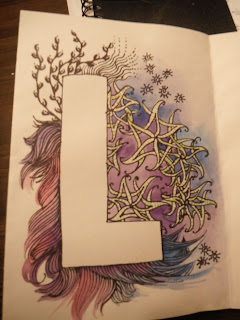 Here's some zentangles ... the first is for a challenge at IamtheDiva to use a tangle called the Fengle, it's really pretty... but not when I do it, to me it's very hard. I was not pleased with this one above at all... 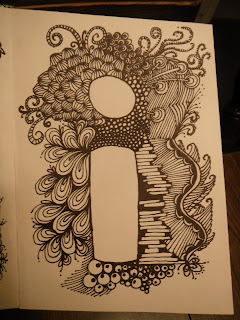 So.... come back tomorow I hope to post more mandalas...
Posted by Fallingladies at 4:47 AM