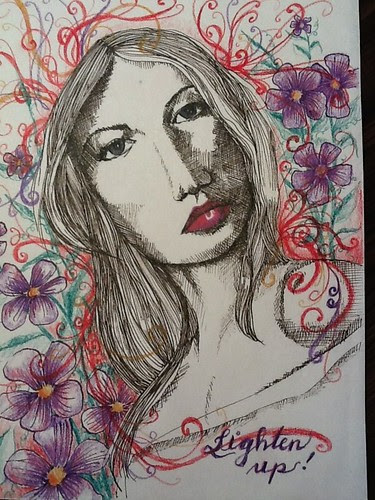 I have soooo many ideas and projects in my head. I can't sleep half the time for all the things I want to make, yet I don't make them.

Well I do make things, but I seem to spend more time searching etsy, making treasuries, reading books and the Internet. So I guess my problem would be just laziness, but it doesn't feel that way. It feels like I get stuck in inertia because I want to do so much.... I can't decide which to do first. It's easier to sit still and dream of creating than to get organized, get focused, get prioritized and just do it.
So instead I surf the really cool sites on my son's iPad, because I can sit with it on the couch by my son like he wants! And I start ten new projects and then put each one aside and go read a book, actually I've started 3 books....
So here's something I started....and finished, but have no idea what to do with it now that it's done. I just needed to draw it.


So tell me, do you paint with a purpose in mind for your art or just because it's something you need to get out of your head?

I'm linking this up to paint party friday and creative evryday. And I just have to say... this was so hard to figure out. I still have no camera so I used the camera in the ipad, it wouldn't let me post photos from the ipad to my blog so I had to figure out how to e-mail them to a flickr acct then it still wouldn't let me post from flickr to here so I had to find the embedded code for the photo..... wow so complicated just to upload a photo... is there an easy way?
photo.JPG, a photo by lelloavengers on Flickr.
Posted by Fallingladies at 3:13 PM