Here's a self protrait for the Butterfly effect...go here to see more...
http://whisper-to-whirlwind.blogspot.com/

only thing is it doesn't look anything like me, (except I do have glasses and long straight hair) and wasn't meant to really, It was meant to show how ugly I felt at that moment... which is odd considering the headline over at the butterfly effect is

"...where we are really very pretty"
but anyway this day, a rainy morning last week where I was late for work, and rushing and not overly happy with life in general... I got out of my car and stepped in a puddle in my little flats, soaked them immediately, grabbed my overloaded purse with my colored pencils just shoved into the top which is as far as they could go as I carry a lot of useless crap around everyday, and went to open the back door to get my umbrella..
Of course the tin of colored pencils fell into the wet... exploding open and colored pencils flew everywhere, under the car, into the puddle, rolling here and there. I scooped up all I could find, threw them into the back seat and grabbed the umbrella as it was still raining, not just sprinkling but a hard cold rain. The second I touched the umbrella it popped open , because it's one of those useful self opening kind that are the size of golf umbrellas... and I tugged and tugged and couldn't get the damn thing out of the back seat. If anyone saw, they would have been rolling in the mud laughing. I half crawled back into the back seat, closed it up, got it out and stomped into work.
To my credit by the time I got to my desk I could laugh at myself and tell my co-workers what a great movie scene that would've made if anyone happened to be writing a movie script and wanted to make the star (because of course I 'm the star of my own movie) look incredibly frustrated and clutzy! 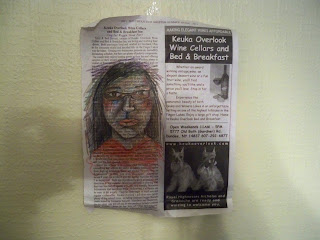 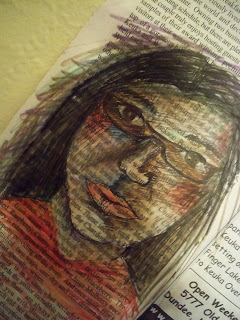 Hope I'm not too late for the party, please go check out the really GOOD portraits!
Posted by Fallingladies at 7:06 AM