Frosted petunias and Incipient wings are hosting the Le Mysterieux Carnival.....For those of you who are out visiting this blog party..... Here's the tale of my visit to the otherwordly event. 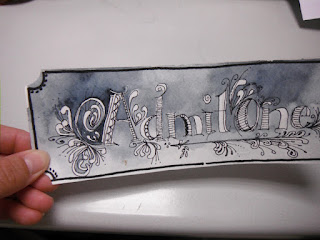 It was not what I had expected.... But then it was my choice. I passed up the black spun candy and  the orange rock crystal sugar bits, the vendors in top hats selling all manner of goodies and dark treats, the glittered pumpkins and dark tule skirts under satin dresses. I slipped past the eerie rides in a dreamy dance, listening to the music of the carousel as I headed straight to the fortune-teller tents. I so wanted an answer to my question that I took the silver ticket that I had found on the seat of my car, rolled up and  filled with glitter, and handed it to the man in the  black suit.

He was standing  guard in front of the passage into the lane where all the psychics in their skirts and scarves and beaded earrings waited. He looked at my ticket with a strange look on his face and put a hand up to block my passage.

He said, "This ticket is for The Teller of Truth's, you will find her deep in the forest. Go down the lane, follow the crow past the fields of corn, follow the trail of tarot cards until your Spirit guide leads you to the correct path. Turn when you see the fairies' garden of mushrooms. You will find her there.  If she will see you that is."

I didn't know what to think, except that I had to see her. I had to know. I started off with only a minute's hesitation and one backward glance at the tall man who watched me walk down the lane. I followed his directions, picking up tarot cards in the wide trail, and soon came upon a split in the path wondering which way to go... when I spotted a bright yellow toad hopping to the left. Assuming he was my guide I followed along. I saw the mushrooms right away and turning onto a new path. A few twists and turns later i could no longer hear the caliope or the brightly dressed carnivale people yelling out their sales pitches. And there she was behind a table full of white items.

She looked nothing like I expected, actually she looked alot like me. Older, heavier, with out glasses and her hair was longer with a streak of gray like a skunk, but still similar to mine. She didn't speak, but she laughed to see me and started pouring some sort of salt into a bowl. She opened a vial and sprinkled something into the bowl on top.  The scent of cloves hit me. The candle flickered and her scarf blew in a wind I didn't feel. I checked out her table, it was covered in white items and she was dressed all in black. There were coins and crystals, i began to think they must have been left in payments. There was even a container of what looked like baby teeth there. I panicked when i realized i hadn't brought money. I had thought my ticket would be enough. She asked for payment, some piece of me, something i loved. I reached into my pocket without a second thought and pulled out my little rock talisman. I carried it everywhere for luck. I set it on the  table and pushed it forward with one finger, worried it wouldn't be enough. Again she laughed and gestured for me to take a star from the bowl. But then she held up a hand in caution and said..." first think hard on your question... Remember this.... The question is more important than the answer...."

I paused, but already had my question in mind..." will everything be OK for us?". This question had run through my head daily since i found the ticket. That's it, just...will it be OK? So i took a white
star, opened it right there, and was so relieved to see the words written there. She dismissed me with a  wave and a laugh and I practically skipped away, so happy to know my answer.

It wasn't until I was in bed that night that I suddenly "knew" that all the stars had that same message. They ALL said the same thing. I had been fooled.

The video shows just a little bit of my journey to the Teller of fortunes.

If you would also like a tiny rock like i paid for my fortune, and a white origami star of your own, leave a comment and i will draw a winner of this tiny giveaway on monday.  Thanks for listening to my tale!


Update, I have realized the video didn't post correctly, i always have trouble with this because i ended up with two separate you tube accounts...  oh well, here's a link, maybe this will work...
http://www.youtube.com/watch?v=ZzlaHbOOMyY&feature=plcp


Posted by Fallingladies at 9:48 AM